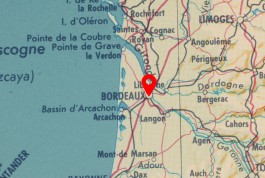 Tom’s triumphant arrival into Bordeaux at the end of November 1797. What does he feel about Napoleon’s military rule? Thomas is injured and weary, but France had also been through a lot since he was last here 4 years ago. The Jacobins had gone, France had defeated Holland, Austria and Italy while making treaty with Royalist Spain, I guess they were both traumatized and exhausted. The City gives Thomas the grandest of civic receptions attended by everyone including the American ambassador.