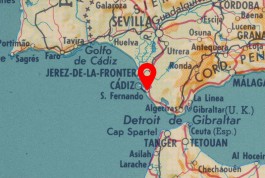 25th April 1797. Unable to enter the port of Cadiz because of a British naval blockade, Tom’s ship sails past the harbour mouth mistaken as a Venetian merchantman. The ship hoves to in Conil bay and unloads its cargo into fishing boats that night. Tom asks to be allowed ashore but his request is denied. The next day the British confront Tom's boat, which has it’s escort and blow them both out of the water. Tom fights honourably with the Spanish but is badly injured. For 6 days he remains on the ship unrecognized (the British seem to know he was on the Ninfa) bloody and disfigured.