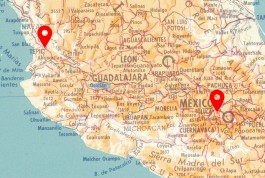 Described as one of the greatest mountain gulches in the world Tom and his new companion Joseph Burling O’Cain an Irish American trader, who I also think was under suspicion by the authorities and presumed (correctly) to be involved in the illegal trade in pelts from the Pacific coast, are accompanied by Don Salvador Fidalgo and his Lieutenant Don Andres Salazar, (on horseback and at the expense of the government) up the Rio Grande de Santiago. From San Blaz to Mexico City, the road takes them a month to complete from Mid September to Mid October 1796 and leads them through a diversity of landscape along the Camino Real. The road is dotted with way stations but also took in the cities of Guadalajara and Queretaro.